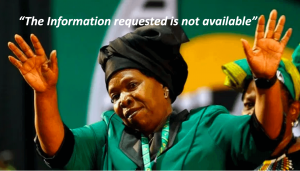 It is Day 90 of South Africa in Lockdown, which now comes in all forms and scopes. There was Level 5, then Level 4 and now Level 3 with its little brother “Advanced Level 3”, none of those terminologies has any roots, they are all made up “on the go” by South Africa’s COVID GODS.

A self-proclaimed critic from Germany recently commented that my rendition of the “COVID GODS SAGA” is one-sided and too negative and compared the content to demagogic material used by right wing parties in Germany, and that he is missing the feedback on gastronomy and economic outlook. Well, Herr G, if you want to continue wearing pink glasses that let the country shine in its glorious past, that is your decision, but has nothing to do with reality.

The reality is “live” and speaks through facts and figures, which are currently one-sided as there is no positive aspect to the way the pandemic is handled by the ideologically blinded and past-sell-by-date Politicians, who put themselves in charge.

Reality Check: Cooperative Governance and Traditional Affairs (COGTA) Minister Nkosazana Dlamini-Zuma (NDZ) does not have the reasons why the Covid-19 pandemic was declared a national disaster available. Also the “scientific rationale” relied on to ban the sale of tobacco products is not available, nor the reasons why alcohol sales are allowed under Level 3 lockdown. This is not “propaganda”, this is fact and can be found in Dlamini-Zuma’s recent written replies to questions posed by opposition MPs, which were published in the past week.

We remember just too well COVID GODDESS NDZ’s stuttering through the justifications for the smoking ban and explaining how “licking the Zol” affects all South Africans. But that was at least an answer, those are no not forthcoming anymore. NDZ is becoming more and more like her ex-husband, who is currently ducking the courts to face the music for hundreds of corruption charges. She has no plan, no answers and does not even hide it.

But this is not the first time NDZ dodged a written question about the controversial tobacco ban: Last month, DA MP Dean Macpherson asked her in a written question for information on the public submissions her department had received and relied on to make changes to the regulations when the lockdown was lowered to Level 4.

This is under any aspect, be it in light of the constitution or in light of her responsibilities as Minister in charge through s3 of the Disaster Management Act, not only insufficient but dangerously illegal and reckless as the lockdown in its various levels and accompanying scenarios threaten not only the South African economy but the individual livelihoods of millions of residents.

The Coronavirus Pandemic is a serious challenger for the well-being of all people on this planet and has to be dealt with, but not to the extent that ignorance and blind activism of “_wannabe_” Disaster Managers surpass the pandemic by becoming the real threat to all.

Now NDZ is challenging the verdict of the High Court, who declared all lockdown rules as unconstitutional and throws public funds and manpower into an appeal battle that is only designed to justify her GOD-like status but is not based on any rationale or empirical fact finding.

To the contrary, comparing South Africa’s lockdown regulations with the rest of the world shows that only Botswana and one province in India were subjected to a tobacco ban, the rest of the world was not, or followed Canada which, in contrast to South Africa, responded to COVID-19 by ensuring that Canadians would continue to have access to alcohol, nicotine, and even cannabis during lockdown. Ontario also allowed cannabis retailers to offer kerbside pick-up and delivery options.

NDZ’s justification that 2 000 public submissions had shown to be in favour of the ban was incorrect and her quoting that “fact” was misleading and highly unethical, the end of a political career in any other country. Reality Check: There were in fact only 1 535 public submissions, of which 47.2% had nothing to do with cigarettes, 23.3% were in favour of the ban being lifted and 29.6% wanted the ban to remain. This translates to 500 submissions versus the individual and constitutionally guaranteed rights of 11 million smokers to light up during Lockdown.
The same applies to the ban on alcohol, which could only be found on this planet in the capital of Greenland, Nuuk, and in Aisne, a region in the northern part of France. But NDZ and co-activist Bheki Cele know everything better as they relentlessly pushed their agenda of abstinence without any supporting facts whatsoever. To the contrary yet again: The number of incidents of domestic violence due to residents going “cold turkey” spoke for itself, but at least that ban was lifted (partially) and we should ignore the fanatic ranting of the Minister of Police who threatens the re-introduction of the ban on a daily basis and even overstepped his powers when confiscating alcohol transported by motorists.

The COVID-GODS of South Africa will go down – sooner or later – but they will surely go down in history as the “GODS, who knew Nothing” a very special, new kind that hopefully will never be allowed to take up political residence on the South African “Mount Olympus” again!