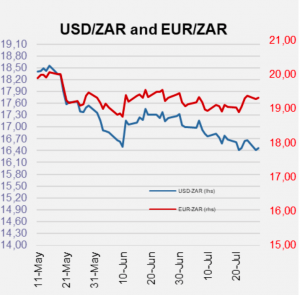 The weekly currency outlook has been off to a good start with a further silver lining on the distant horizon.

The South African Rand (“ZAR”)strengthened alongside most of its Emerging Market (“EM”) counterparts early this week, gaining around 1.4% against the US Dollar (“USD”) to close near its strongest levels since March 2020. With the dollar index falling to a 2018-low yesterday, most EM currencies have received a boost, and the ZAR has been one of the main beneficiaries of this USD correction from very expensive levels.

The latest news that the International Monetary Fund (“IMF”) will grant South Africa US$ 4.3bn in emergency funding has also been supportive of the local unit, with the agency confirming yesterday that the funding had been approved. This marks the largest emergency disbursement yet from the IMF to assist a country with fighting the coronavirus pandemic and the severe impact that it has had on the economy.

In terms of the day ahead, the data calendar picks up with the 1Q2020 non-farm payrolls figures scheduled for release. Recall that growth in non-farm payrolls has slowed consistently since 3Q2018 and given SA’s weak economic backdrop leading into the Coronavirus pandemic, it is likely that this trend continued into the first economic quarter of 2020.

Factors, which may wear heavy on the ZAR are the increasing protests and violent responses by the South African Police Forces as well as ESKOM’s continued inability to keep power generating units properly maintained with load-shedding being once again on the cards after six units failed on the weekend.

Positive stimuli for the ZAR are not on the horizon as the government increasingly fails to exude confidence and main revenue generating parts of the economy are still prevented from normal business. The upcoming court cases on the ban of alcohol and cigarettes may bring some light into that dark tunnel though.